Oregon was the nation’s second most popular state for inbound moves last year according to an annual United Van Lines study. We were second only to Vermont.

According to the mover, the study and its accompanying survey, which examines the motivations and influences for Americans’ interstate moves, also revealed more Baby Boomers and Gen Xers moved than any other age groups last year.

“Key factors like retirement, wanting to be closer to family and lifestyle changes influenced by the pandemic along with current housing prices drove moving patterns in 2022,” Michael A. Stoll, economist and professor in the Department of Public Policy at the University of California, Los Angeles, said. “The United Van Lines study encompasses data that Americans are now moving from bigger to smaller cities, mostly in the South, some in the West, but even an increase of migration to the Northeast, which has not been typical. We’re also seeing younger Millennials migrating to vibrant, metropolitan economies, like Washington, D.C. and Portland, Oregon.”

The survey also shows the top motivations for inbound moves, 35% desired to be closer to family, 33% moved for a new job or company transfer and, 20% moved upon retirement.

Though retirees only accounted for one fifth of moves, United Van Lines report those age 55 and older accounted for 55% of their inbound move customers.

Community Grants: If you, or someone you know, is running a program for area kids and families, the Benton Community Foundation, or BCF, wants you to know they have available grant money.

More than $145,000 will be available through BCF’s annual community grant cycle in 2023. Applications will be available January 10 and are due by March 15, at 5 pm. Nonprofits can request funding between $1,000-$10,000. If you have questions, contact Brittany Kennedy, their director of grants and programs, at: Brittany@bcfgives.org or 541-753-1603. To get started, click here for more information.

Oregon’s Music Economy: If you’re a local commercial music worker, like musician, sound engineer, venue owner or producer, Oregon lawmakers want to hear from you – their goal is a health assessment of the Oregon music industry. The hitch, a January 15 deadline. The good news, it’s an online survey, and it’s easy.

Economists believe music accounts for a $1 billion chunk of the state’s economy, and that’s not counting the impact music has on surrounding businesses and tourism. So last year, Music Oregon and the Oregon Business Development Department persuaded lawmakers to start getting a better grip on the economics at play.

Click on the link to participate in Oregon’s first ever Commercial Music Census.

Bed, Bath – And the Great Beyond: It almost seems quaint now that Corvallisites saw the likes of Bed, Bath & Beyond and Borders Books as threats to local retailers back in the day – it was a Pre-Amazonian era.

Fast forward to last Thursday, when Bed, Bath & Beyond announced they’re quite possibly beyond a re-organization, and may be altogether caput. In a release, the Union, New Jersey company stated, “There is substantial doubt about the company’s ability to continue as a going concern.”

Notably, local competitor Inkwell continues on. And, as to the state of our bookstores, Grass Roots and The Book Bin continue, and Borders long ago crossed over to the great beyond – now only a bookmark, as it were.

More Gazette-Times Happenings: Last week, we reported Lee Enterprises, the newspaper chain that owns the Corvallis Gazette-Times, is being sued for violating the privacy of its subscribers. Later in the week, news came out the chain received a NASDAQ non-compliance letter in an unrelated matter, as well.

In a release from Lee, they acknowledge receiving a letter from the Listing Qualifications Department of NASDAQ “indicating that, as a result of the company’s delay in filing its Annual Report on Form 10-K for the fiscal year ended Sept. 25, 2022 (the “2022 Form 10-K”) within the prescribed time period, the company is not in compliance with the timely filing requirement for continued listing under Nasdaq Listing Rule 5250(c)(1).” The release goes on to say they intend to file within a 60 day grace period, and that they anticipate “no immediate effect on the listing or trading of the company’s common stock on The Nasdaq Capital Market.”

Lee Enterprises operates in 77 markets across the country, and is the nation’s sixth largest newspaper chain. Last year, Alden Capital attempted a hostile takeover, but has suspended the effort for the moment. Many industry observers believe Alden, which has a reputation for cutting news and reporting budgets, will make another attempt at a later date.

Biz Readers Meetup: Growth & Mindset Book Club for Business discuss one new book each month with the intention to come away being more empowered, motivated, and knowledgeable about business, career, and professional development.  According to the Corvallis Chamber of Commerce, this month’s book is Atomic Habits by James Clear. Slated for 5 to 7 pm, Wed., Jan. 11 at The Biere Library, 151 NW Monroe Ave., Corvallis.

Educational Small Business Mixer: Socialize a little and learn a lot as local expert Samantha Alley unwraps asset, profit center and financial security aspects of real estate for business owners. Add to this, an examination of how local home rental and ownership trends may impact your human resources efforts now and going into the future.

Alley has decades of experience, and has worked in Willamette Valley real estate since 1994. Notably, she is a go-to expert that we rely on at The Advocate.

These Small Business Mixers are hosted by a regular team of local financial experts that includes Alley, along with Rob Scheier from Edward Jones and Heidi Clodfelter of Principle Property Management. 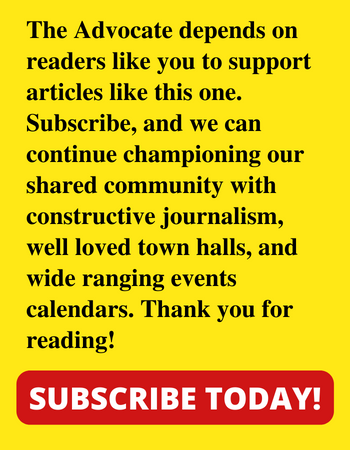 How are most moms STILL the default parent in 2022?!